We will make a brief journey through the fascinating artworks of Senigallia, through which the city tells and tells about its people.

Many historical and artistic monuments must to be seen to enjoy the atmosphere of the past.

It consists of the estuary of the river Misa extended by two piers with 300 berths, of which 30 are for boats in transit. At the entrance of the harbor to welcome the return of the sailors “Penelope”, a statue designed by Gianni Guerra.

The Rocca Roveresca, designed by the military architect Baccio Pontelli, is the oldest monument of Senigallia. It was built in 1480 by Duke Giovanni Della Rovere. The fortress is situated between the city and the sea, and stands on the ruins of a Roman tower and a stronghold of 1355, built by order of the Cardinal Albornoz.
You can still admire the elegant structures, doors and windows with marble frames, the beautiful spiral staircase. Some rooms of the “Rocca” are now seat of exhibitions.

The Fountain of the “Piazza del Duca” commissioned by Francesco Maria II Della Rovere at the completion of the first of the modern aqueduct, was built by the Venetian master Stefano di Tommaso and opened in 1602. The fountain built with pink marble from Verona, is decorated with four bronze ducks.

Palazzo del Duca
It stands in front of the “Rocca” and was built by Guibaldo della Rovere, Duke of Urbino, in the middle of the sixteenth century. The ducal coat of arms appears in the ceiling of the first floor, where the decoration is attributed to the famous painter, from Marche, Taddeo Zuccari. The facade, altered in its original form by a number of interventions, has a beautiful white stone portal.

The Palazzo Baviera is a building from the late Middle Ages. The courtyard with the patterns and proportions of the cloister, offers a collection of meditative atmospheres.
At the center of the courtyard there is a well, surrounded by four coats of arms of Baviera.
The structure of this cloister, creates complex movements of light and shadow.
In the Baviera complex, coexist different architectural styles, from Romanesque to the Middle Ages, to the first and second Renaissance period. On the first floor you can visit the Brandani’s room with five ceilings dedicated to heroes, goddesses, allegories, feats of arms classical memory.

From Piazza del Duca passing through the nearby Piazza del Foro Annonario, an important building in Neoclassical style surrounded by an arcade of thirty Doric brick columns, twentyfour of which form the two lateral exedras and six form the central body. In the superior hemispheres of the “Foro Annonario” are placed the new rooms of the Municipal Library “Antonelliana.” Established in 1767, with the legacy of the Cardinal Antonelli, it still keeps over 50.000 volumes.
Neoclassical building designed and built between 1830 and 1831 by the architect Pietro Ghinelli from Senigallia.
The complex has maintained its original function of market and fish market and the “scenic” as completion of the Portici’s theory, which run along the canal Misa.

These 126 arches resting on square pillars seem to follow the gentle curve of the River Misa before it flows out into the sea. They were built by Cardinal Ercolani with blocks of white Istrian stone, in a period when trade in Senigallia was booming. They were intended to replace the old town walls with shops destined to house the merchants at the “Maddalena Fair”.
Along the two banks of the town canal the trading of grains, wood, spices and crafted articles was carried on.

In the years of its greatest splendour the fair attracted as many as 500 ships and 50 thousand foreigners from Eastern countries, northern and central Italy as well as central Europe.

In confirmation of its fame Carlo Goldoni set one of his musical comedies called “La Fiera di Sinigallia” in the town.

Work on this baroque church began in 1576. On the high altar there is the “Bearing of Christ to the Sepulchre” by Barocci with laterally, the Nativity and Epiphany by Giovanni Anastasi.

It is the headquarters of the Confraternity of the Cross and Sacrament instituted by unanimous vote in 1818 and patronized by Pope Pius IX.
Over the main door, in the choir, is the organ built by the well-known Venetian Gaetani Callido.

The Town Hall was built between 1611 and 1613 on one side of Piazza Roma, the social focus of the town and also site of the Neptune Fountain, commonly called the “armless man in the square”. The bearded god with a crown encircling his mass of wavy hair, his forehead lined with thought as he looks down towards the left, evidently showing the sirens the way to go in the vastness of the sea with his missing arm. The other arm, also missing, was probably holding a trident to his side. It is said that the Turks deliberately committed the outrage of breaking off his arms and trident, as well as the end of his nose and the points of his crown.

The Council Hall, in eighteenth century style, is adorned with several works of art: three paintings by Torregiani and one by Santini, stucchi, paintings on the ceiling and medallions over the four doors. The hall is entirely surrounded by a gallery and has a centrally placed crystal chandelier, originally from the Fenix Theatre, and a bust of Pope Urban VIII over the main doorway.

The busts of Cardinal Testaferrata, Pope Pius IX, King Vittorio Emanuele II and Count Marchetti are in four niches in the side walls. Paintings in the Mayor’s anteroom are: the Madonna and Child, Jove and Juno and a memorial tablet and portrait in honour of Angelo Maierini who “dedicated his life to the study of law”. In the Mayor’s office there are precious paintings in frames of wood and gilded stucco: a Nativity Scene of the Flemish school, a St. Girolamo reputed to be by Lo Spagnoletto, a copy of Raffaello’s “Madonna taking a walk”, “an old man drinking”, and a panel depicting an “ Old Man’s Head”.
A Silver Mallet bearing the town coat of arms on the top, is also part of the collection.

The church is three kilometres from Senigallia, on a green hill overlooking the sea. It was built in fulfilment of a vow made by Giovanni Della Rovere, lord of Senigallia, and his wife Giovanna di Montefeltro who were desirous of an heir.
The marble portal in baroque style was later built by Vittoria Della Rovere wife of Ferdinando II Medici, and, for this reason, the coat of arms high on the wall bears the Della Rovere emblem together with that of the Medici.

Inside there are two cloisters – the smaller of which is unfinished. At the centre of the larger one there is a well bearing the Della Rovere coat of arms. There is a portico all around supported by slim, elegant columns and above there are the small windows belonging to the monastic cells. Along the portico wall it was once possible to read episodes from the life of St. Francis, but now they have almost completely disappeared. Inside the church, on the right, there is a statue of St. Pasquale and a large painting of St. Francis receiving the stigmata on Mount Verna. On the left there are various paintings of the saints and up behind the high altar is a “ Madonna and the Saints” painted by Il Perugino in 1490.
In the vestry there is an interesting fifteenth century wash-basin on which, together with the Della Rovere coat of arms, is inscribed the motto “ Lavamini et mundi estote” (Wash yourself and be purified).
The convent houses the Museum of Share-cropping History, with a vast assortment of documents and farming implements which makes this Centre one of the most interesting of its kind and well worth seeing.

Until 1917, the Convent of the Graces used to contain the “Madonna of Senigallia” a masterpiece by Piero della Francesca. After being almost forgotten for centuries in the Convent of the Graces, this painting was taken to Senigallia Town Hall, where it remained until 16th November 1916.
Then, fearing it would be damaged during bombing raids, it was entrusted to the Urbino picture gallery. 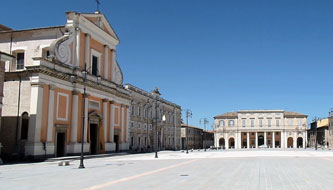 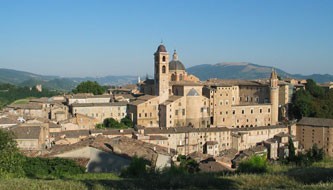 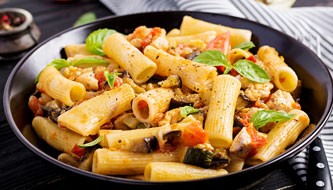 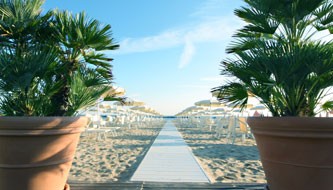